Fall is coming and my oven has been on more and more these days. As soon as you can feel that little crisp in the air, its time to bake! And what better thing to bake than the always favorite CINNAMON ROLLS.

Soft, gooey and super rich. Not usually what I go for on this site, but I just can’t help myself when it comes to cinnamon rolls! My family loves, loves cinnamon rolls!! It’s such a special treat we like to have on weekends, especially when the weather gets chillier.

My usual go-to with baking is to make things either full or half whole-wheat, use less refined sugars, sneak in some veggies. You know what I mean! BUT I have to make an exception with these rolls. Sometimes you just want a decadent, gooey cinnamon bun. With thick cream cheese frosting and a buttery, soft dough. Breakfast decadence at its best!!

How do you make Nutella cinnamon rolls?

If you’ve never baked with yeast before, there’s no need to fear! It’s simple. I’ll walk you through this process step-by-step. Plus once you try it, if you’re a newbie, you’re going to want to make all of the yeasty breads and rolls!

I always make my cinnamon rolls in the evening so they can rise overnight and we can enjoy them in the morning, but you can also have the recipe done and baked in about 3 hours if you prefer to just do it all at once. I’ll leave you options for both in the recipe instructions!

Start the recipe by mixing the yeast with warm (whole) milk and a bit of sugar. Whisk it together and allow it to sit for a couple of minutes to activate and get a little foamy. If it isn’t foaming up after a few minutes, you will want to try again with fresh yeast!

Next, add in the rest of the sugar and softened butter until the butter is slightly broken up. I always use the dough hook attachment for my mixer! You’ll need the eggs next, one at a time, mixing as you go. Add in one cup of flour and the salt and then mix until things start to shape up.

Then add in the remaining flour, one cup at a time until fully incorporated. Turn the mixer up and mix until the dough easily pulls away from the sides of the bowl. If it is still sticking after a couple of minutes, add a bit more flour, one tablespoon at a time. Once you’ve kneaded the dough with the mixer for about 3 minutes, place the dough in a lightly greased bowl and cover with plastic wrap or a towel, allowing it to rise for 1-2 hours or until doubled in size.

Note: If your kitchen is not that warm, turn the oven to keep warm and then turn it off after a few minutes, then use that warm space to allow the dough to rise.

Once doubled in size, get a baking pan ready by lining it with parchment paper. You can use a 9 x 13″ pan, or my favorite, a 11 x 17″ baking sheet to avoid squishing the buns too much.

Punch down the dough (so therapeutic), then, on a floured surface, roll out the dough to a 12 x 18″ rectangle (I actually use a measuring tape). Smear a bit of softened butter all over the dough, then sprinkle cinnamon on top.

Now for the FUN part: NUTELLA!

We will need 1 whole cup of Nutella for this recipe. Add the Nutella to the buttery dough, placing a spoonful of it in various places all over the dough, then use the back of a spoon to smear it all over as evenly as possible, leaving about an inch border around the sides.

Now, roll up the dough from the long edge, creating an 18″ roll. Then you’ll slice the roll into 12 even rolls. I usually cut the roll in half, then half again to create 4 equal pieces, then into 3rds.

Place the rolls face up on the prepared baking pan. Then cover the rolls again tightly with aluminum foil sprayed with some cooking spray, or with plastic wrap, or a clean dishcloth. Let the rolls rise again until doubled in size, about 1-1.5 hours.

After the Nutella cinnamon rolls are puffed up and fully risen, preheat the oven to 350 F, then bake the rolls, uncovered, for about 25 minutes. If after 15 minutes the rolls are starting to brown too quickly, cover them loosely with some aluminum foil.

Remove from the oven and let them cool for about 5 minutes before smothering them with cream cheese frosting and enjoying (or enjoy them as is).

How do you make these Nutella rolls overnight?

This is my favorite option! Prepare the rolls up until you’ve sliced them and placed them on the baking sheet for the second rise. Cover the rolls tightly with plastic wrap or aluminum foil, then place them in the fridge overnight.

The next morning, about 1.5/2 hours before baking, remove the rolls from the fridge and allow them to rise on the counter on the pan as is. Then continue with the recipe as usual.

I usually take them out the minute I wake up, so we know breakfast is ready in 2 hours!

Do you have to use real Nutella for these rolls or can you use homemade Nutella?

I have definitely tried AND LOVED this recipe with my homemade Nutella, but it is certainly not as decadent as the one with the regular store-bought Nutella!

You can also make this recipe with any nut butter spread, including peanut butter (or peanut butter AND NUTELLA for an amazing Reese’s type of treat).

You could also try topping this recipe with something other than cream cheese icing, like a simple vanilla glaze. Feel free to play around!

You’ll love these other breads and loaves from the blog:

*If your kitchen is not that warm, turn the oven to “keep warm” and then turn it off after a few minutes, then use that warm space to allow the dough to rise

**To make these overnight, cover the rolls as in step 6 but then store them overnight in the fridge. About 2 hours before you’re wanting to eat the rolls, remove the rolls from the fridge and proceed with letting the rolls rise until soft and puffy, continuing with step 7. 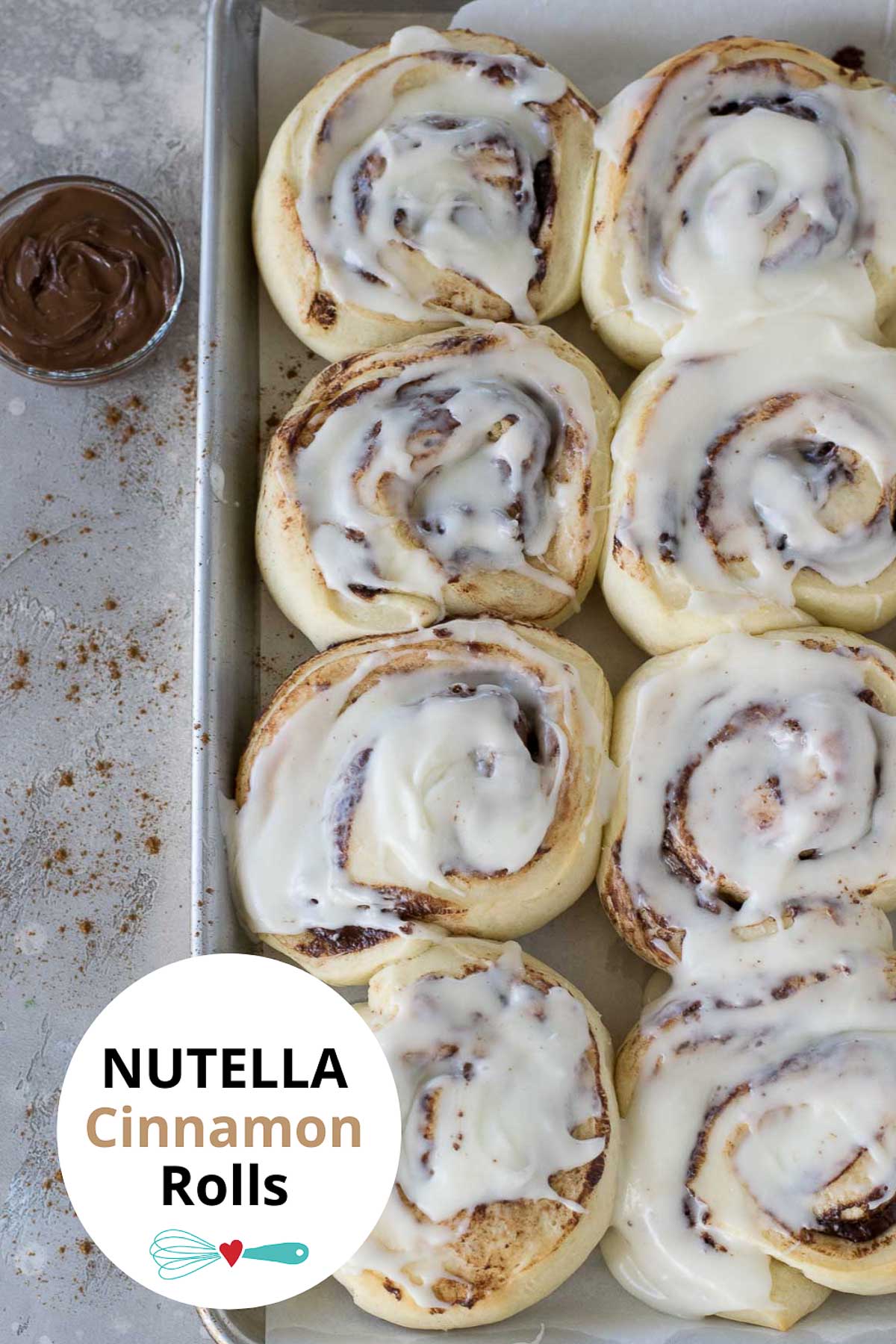 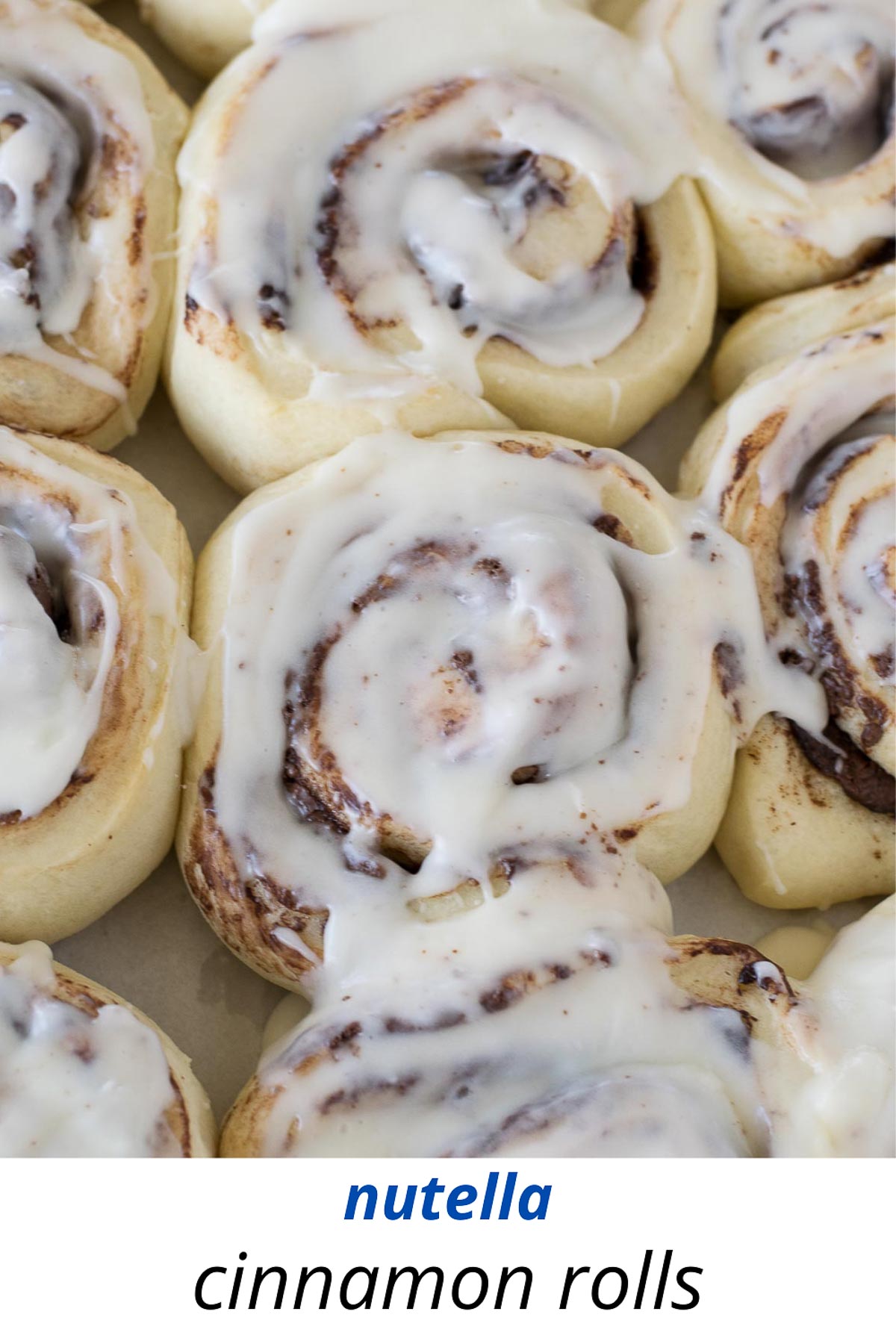