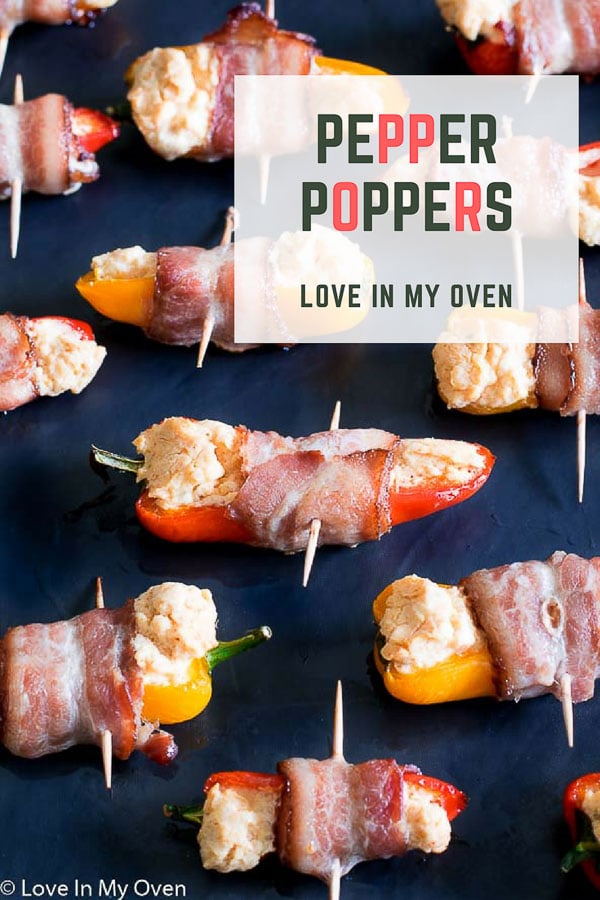 This post may contain affiliate links that earn me a small commission, at no additional cost to you. All opinions and recommendations are mine.

This post was originall published in 2017. I’ve since redone the text but the recipe remains the same.

Hi! I wasn’t sure if I was going to get these bright little pepper poppers out to you before Easter, but I’m really glad I did. I think they would make for the perfect low-carb appetizer for your Easter gathering, as they’re bright and colorful, and you can “pop” them into your mouth. Plus, how fun is it to say “pepper poppers”??

I first had a bacon-wrapped cream cheese-stuffed jalapeno when we were staying at my sister-in-law’s place a couple of years ago, and I was hooked. SO good!

That particular weekend was full of bacon. I think we had it at every meal, and it has since been a running joke. After a day full of bacon imbedded meals, Etienne and I decided to buy breakfast for the next morning, and as we walked in the door with fresh cinnamon buns (I know, store-bought…who am I!?) his sister exclaims “but I was going to make bacon”!! So, we had cinnamon buns. And bacon. 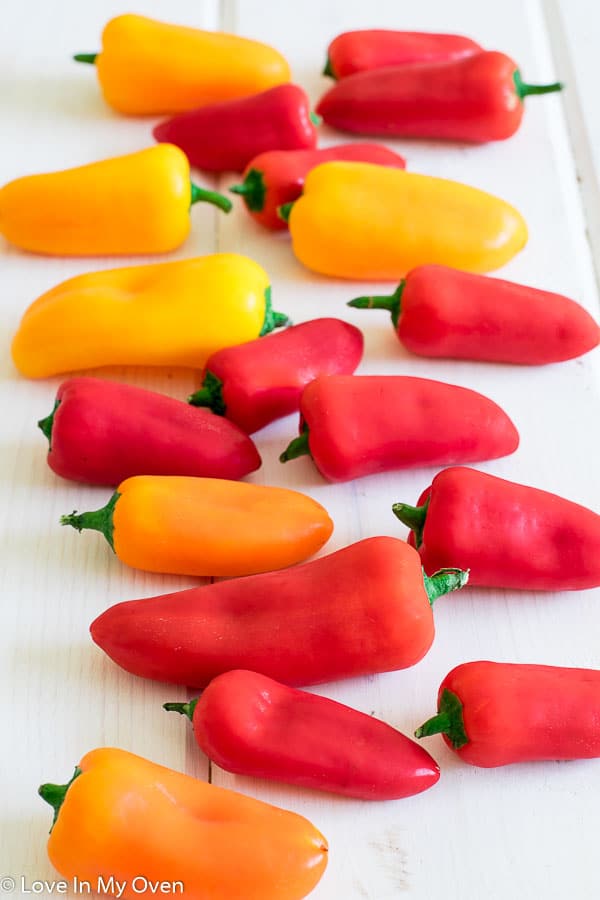 How do you make pepper poppers?

For this recipe you will need those tiny little bell peppers you often see in the produce section at the supermarket, and think “how cute are these”!? They’re split open, stuffed with a cream cheese mixture and wrapped in – you got it – bacon. They come together so easily, and you can even make them the night (or two) before, keeping them assembled in the fridge until you’re ready to pop the poppers into the oven prior to serving.

These sweet mini bell pepper poppers are based off the ever-popular jalapeno popper recipes out there, but without as much of a kick, making them a little more kid-friendly. I personally like a little spice, so I used jalapeno Monterey jack cheese in the stuffing. You could also include a 1/4 tsp cayenne pepper for extra kick. If you’re serving these to kids, you might want to swap the jack cheese for a strong cheddar cheese.

Start by cutting the peppers in half lengthwise, and removing all of the seeds and membranes. Combine the softened cream cheese, shredded cheese, and roasted garlic. Using a spoon, fill the open peppers just to the brim; do not overfill! It will all just ooze out in the oven.

Speaking about the oven, have you seen these Dot temperature gauges from ThermoWorks!? They come in the most amazing colors! 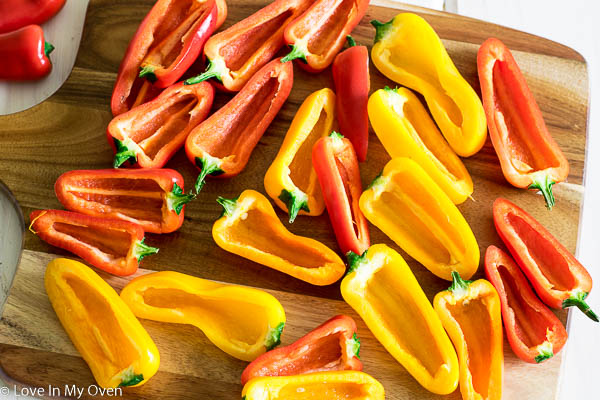 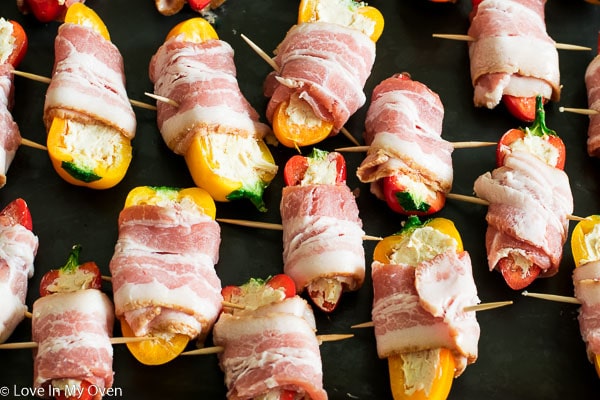 Wrap up those itty bitty little peppers in bacon, stab ’em with a toothpick and place them on a baking tray. These poppers take about 25-27 minutes in the oven, or until the bacon is nice and crispy. Serve immediately!

PS – they don’t have to be an appetizer. We ate these as dinner the other night with a salad on the side.

Can you use jalapeno peppers instead of bell peppers?

Yes! We actually love the jalapeno pepper poppers, but the kids aren’t HUGE fans of spice so these mini bell peppers are a better option for them (and most kids). Plus, the colorful peppers are so pretty, aren’t they!?

If you do use jalapenos in place of mini bell peppers, just pick jalapenos that are roughly the same size as a mini bell pepper would be; thankfully, they usually are already about the same. The bake time and everything else will remain the same, but consider using a mild cheese for the filling vs the Monterey jack.

How long do pepper poppers last?

Leftovers keep very well! You can store them in an airtight container for 3-4 days in the fridge. They’re actually really good cold but you could microwave them or heat them up in the oven for a bit too! 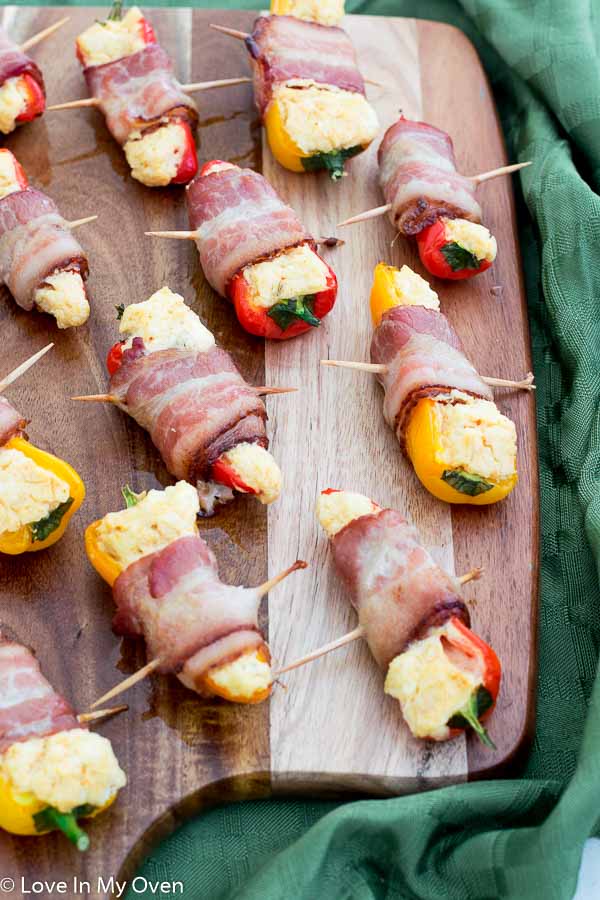 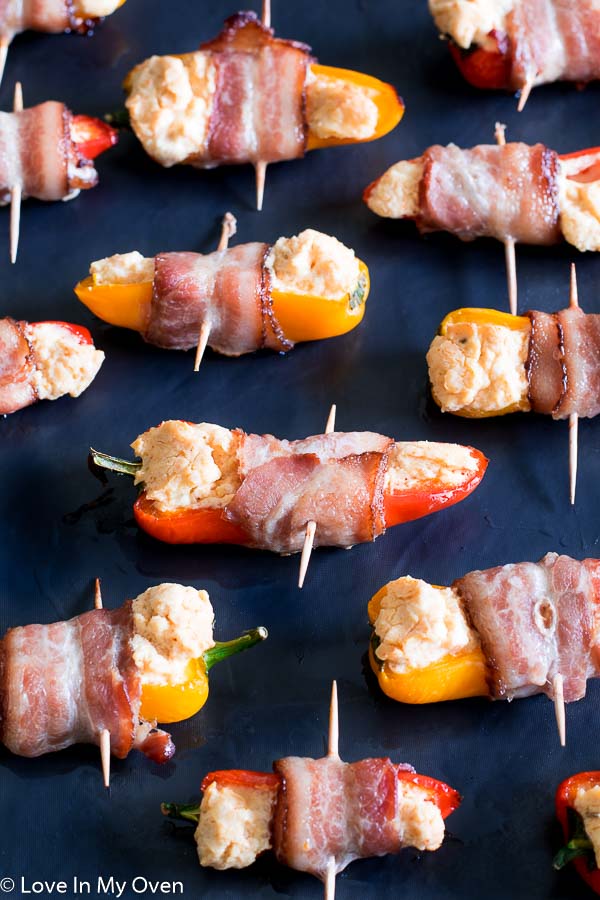 On a low-carb diet? I’ve got your back. Check out these other low-carb recipes from the blog:

And if you’re just looking for some snacks, I would recommend a few of my faves:

Peter Piper would definitely pick a peck of these pepper poppers! Wrapped in bacon and stuffed with cheese, they’re the perfect low-carb appetizer or snack.

Any leftovers can be kept in an airtight container in the fridge for 3-4 days and reheated either in the microwave or in the oven at 300 F for about 10 minutes.

Plan ahead: Prepare the peppers through step 3 and keep covered in the fridge a day or two before cooking. Let the peppers warm up a bit before placing in the oven, about 10 minutes. 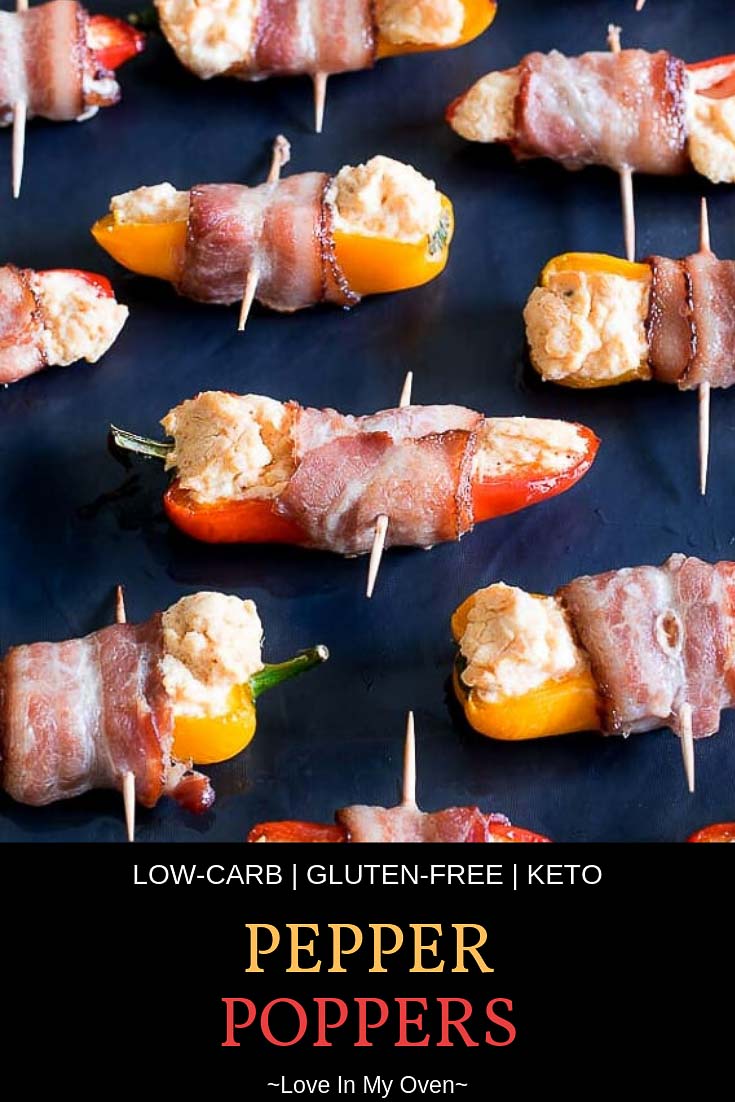