These vegan magic bars are made with almond flour, maple syrup and vegan chocolate chips! All the flavor of your favorite 7 layer bars but a little better for you!

Anyway, I only discovered these bars a few years ago at a holiday cookie exchange and every year since I’ve HAD to make them. They’re so good! This is the first year I’ve tried a vegan version though! Not as naughty, but I swear they’re also DYNAMITE!!

I’m so glad I tested these out last month because all of a sudden we have decided to be gone for most of December! Last week Etienne and I got to go to an amazing 5-star resort in Cabo, thanks to the company that he works for. And we got to go just on our own, without the kids. BUT since we felt guilty about going to Mexico without the kids, we booked another trip with them for next week! So, somehow we’re ending up spending our month in Mexico. Not the worst thing!

SO I’m glad I did most of my holiday baking early this year. My freezer is stocked!

What are magic bars?

If you haven’t had magic bars, you’re missing out! They’re traditionally made with a buttery graham cracker crust, then layered with pecans, coconuts, chocolate chips or chunks and condensed milk. They are DELICIOUS!

The vegan version is extremely similar in structure with a few a substitutions. They’re made with:

How do you make vegan magic bars?

Start by making the crust. Line an 8×8 baking pan with parchment paper and mix together the almond flour, maple syrup and melted coconut oil. Spread it all out in the pan and pack it down as firmly as possible.

Top the crust with a thick layer of vegan chocolate, either chunks or chips. The chips will melt nicer but I’ve always been a fan of chocolate chunks.

After the chocolate, the next layer is the pecans! Chop up the nuts until they’re in smaller pieces (but not too fine). Spread them all over the chocolate.

The next layer is the shredded coconut. I use unsweetened but for an extra sweet punch you could use sweetened coconut!

Cover the bars thoroughly with the coconut until you can’t see the nuts and chocolate underneath.

For this recipe you’ll need 2 small cans, or about 22 ounces.

Pour the condensed coconut milk all over the bars and use a spatula to spread it evenly all over. Place the bars in the oven and bake them for 28-30 minutes or until the coconut turns into a light golden brown.

Once out of the oven, cool the bars for an hour before putting them in the fridge for an hour to solidify.

Once firmed up, cut the bars into 12 equal pieces. They’re ready to serve or to place into a box for a holiday cookie exchange!

Since I tested these a few times before publishing, I have a freezer FULL. Which is good, because they’re even good frozen and I can’t help but sneak them out of the freezer when I’m craving something sweet! Not that there isn’t an abundance of other sweet things around the house this time of year!

Anyway, whether you’re following a vegan diet or not, you will love these healthier magic bars. Hello, Dolly!

You’ll love these other vegan treats from the blog:

These vegan magic bars are made with almond flour, maple syrup and vegan chocolate chips! All the flavor of your favorite 7 layer bars but a little better for you!

The bars store well in the freezer for up to 2 months. 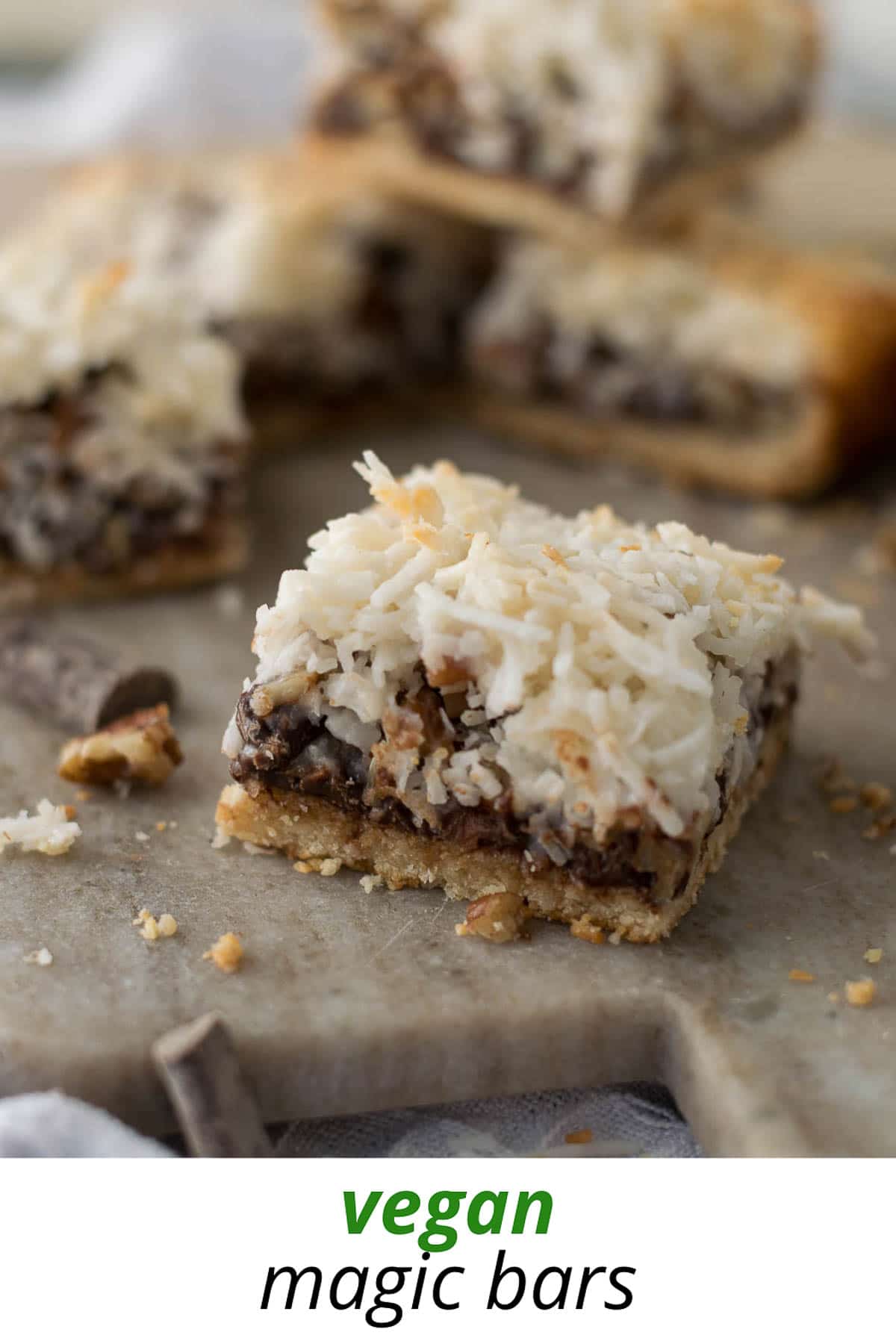 As soon as I start buying blueberries by the case

Rich, gooey and upside down!? This chocolate upsid

Anyone else feel like starting the week off with a