This rich and creamy skillet pasta is a hearty one pan pasta dish of linguine with vegetables and meat sauce smothered in cheese, all ready in under 30 minutes!

*Please note* this post was originally posted in 2017. I’ve since redone the text but the recipe remains the same.

Growing up, I was a pretty picky eater. I disliked most meat (WAY too much effort to chew), and I didn’t particularly care for vegetables, unless I had pulled it fresh from the dirt of our garden. If you had asked me back then what my favourite meal was, or what meal I would request as a birthday dinner, it would have been spaghetti, hands down. PLAIN spaghetti. No meat sauce, no tomato sauce, just plain old spaghetti with a pat of butter and a sprinkling of parmesan cheese. I loved to eat spaghetti!!

I can remember being disgusted by my brother and parents pouring tomato sauce all over their spaghetti – why would you ruin something so perfectly delicious!? And meat sauce? Now that was just downright gross. Funny how our tastes change….

While I admit I still occasionally crave a bowl of spaghetti with just butter and cheese, I am happy to say I’m a converted spaghett-erian. Bring on the meat sauce, the cheese, and heck, let’s throw some diced veggies in there too!

What is skillet pasta?

I know I’m a big proclaimer of favourites, but without seeming too disingenuous, I can tell you that this one pan pasta I’m about to share with you IS ONE OF MY FAVOURITES!! It’s so good! The sauce is so utterly creamy, thanks to a slow simmer of all the ingredients. The broiled cheese on top is the perfect accompaniment to a rich and filling pasta dish. And the best part? It’s all done IN ONE PAN!! One pan to clean. ONE! No pasta in one, sautéed veggies in another, meat sauce in another…just one big ol’ skillet. Oh, and you can whip this meal up in under 30 minutes. WIN!

My vegetables of choice in this dish include bell peppers, mushrooms, and spinach, but you can certainly customize the veggies to your liking. I’ve used a jarred marinara sauce (I know, I know – sometimes I buy my pasta sauce), but you can use whatever tomato sauce you’d like, as long as it’s about 650 mL.

I use my 10″ cast iron skillet for this recipe, but you can use any dish as long as it’s deep enough to contain all of the ingredients and is oven-safe.

How do you make skillet pasta?

Browning the beef is the first place to start. Once there is no pink left, you can move on to dumping in the sauce and broth along with the veggies (sans spinach) and linguine. I find it easier to work with the noodles if I break them in half first. Everything simmers for about 10 minutes, or until the noodles and vegetables are soft.

The spinach gets added at the end; stir it in until the leaves have just wilted. Then top everything with cheese and stick the skillet under the broiler for a few minutes!

I like to throw some fresh basil on top of the cheese once the skillet comes out of the oven. Get that pan on the table and dish away!

Ooey, gooey, spaghetti perfection – even if my 7 year old self would strongly disagree!

If you like easy, quick meals, you’ll LOVE my other 30 minute meals!

This rich and creamy skillet pasta is a hearty one pan pasta dish of linguine with vegetables and meat sauce smothered in cheese, all ready in under 30 minutes!

Once cooled, leftovers will keep in the fridge for 4-5 days in an airtight container.

Pin this dish for your next busy weeknight! 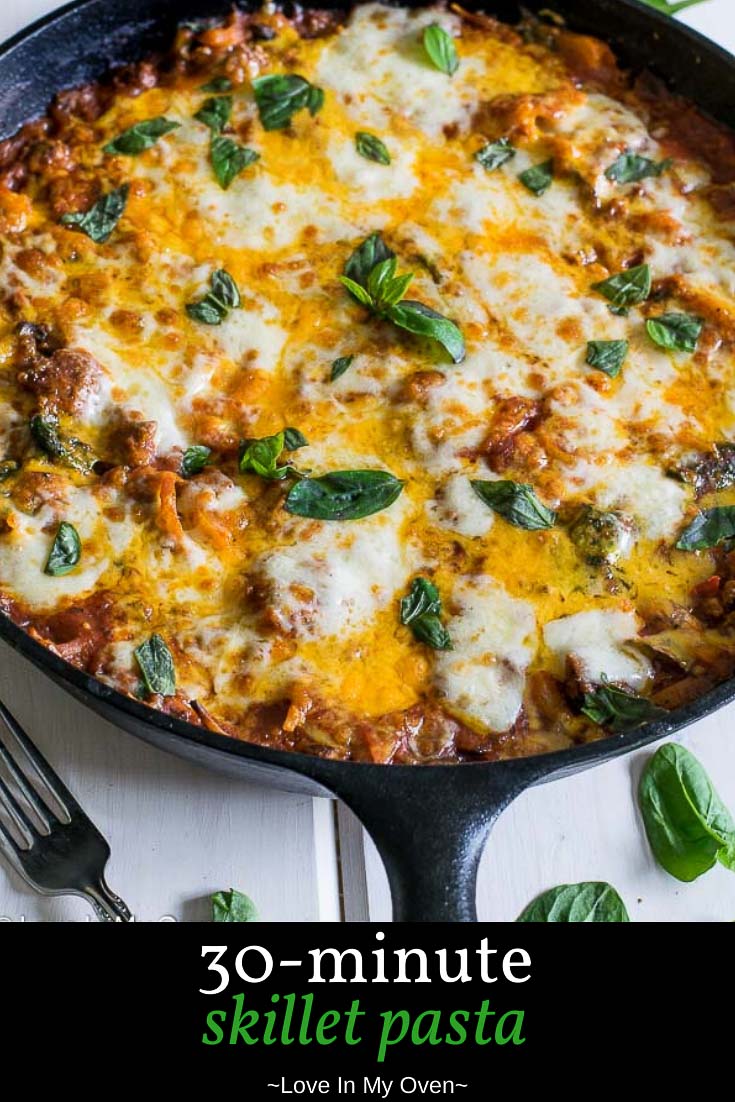 Soup season requires a warm carb on the side!! The