Don’t throw away that bone! Make this super easy and flavorful ham bone and bean soup. Full of nutrition and even freezer friendly! 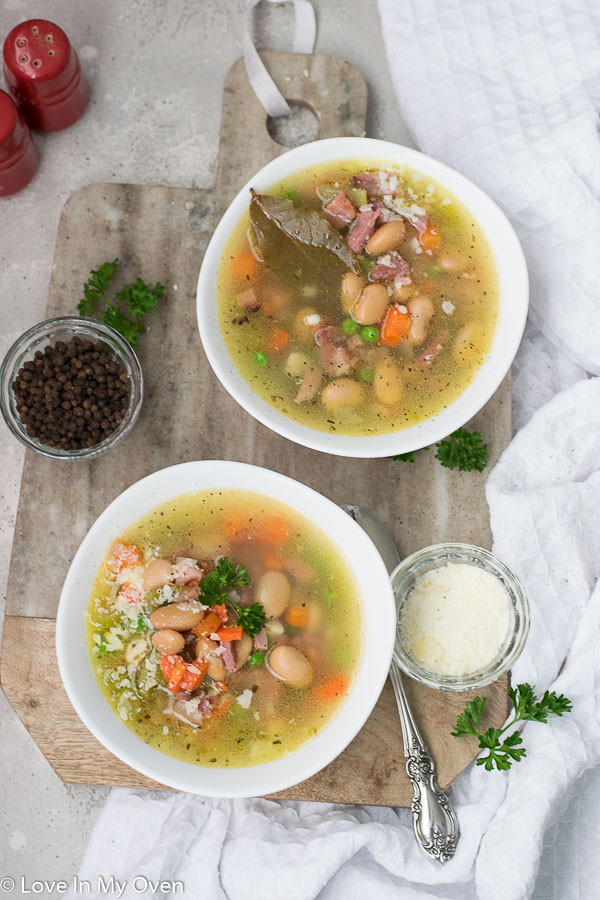 I cooked a ham! A giant ham, to be exact. I’ve honestly never actually cooked my own ham for my family until this past Easter weekend. We all LOVE when my Mom has a ham for holiday dinners and we often head home with tons of leftover ham (and sometimes a bone). This year, since it was just going to be us again, I thought I should try the ham myself!

The ham was DELICIOUS and so easy. I did a spiral ham with an apple cider glaze. You can’t beat that sticky crust that you get from a sweet glaze on a ham! So good.

Anyway, the ham was also huge, which means we have a ton of leftovers. I froze most of it, because my family is getting a little sick of ham and cheese sandwiches! There are so many good ideas out there on the Internet for leftover ham, but I just knew I would be making a bean and ham soup! It’s one of my favorites! It’s also a great way to use that giant ham bone up (although Baker had a few other ideas in mind for the ham bone). 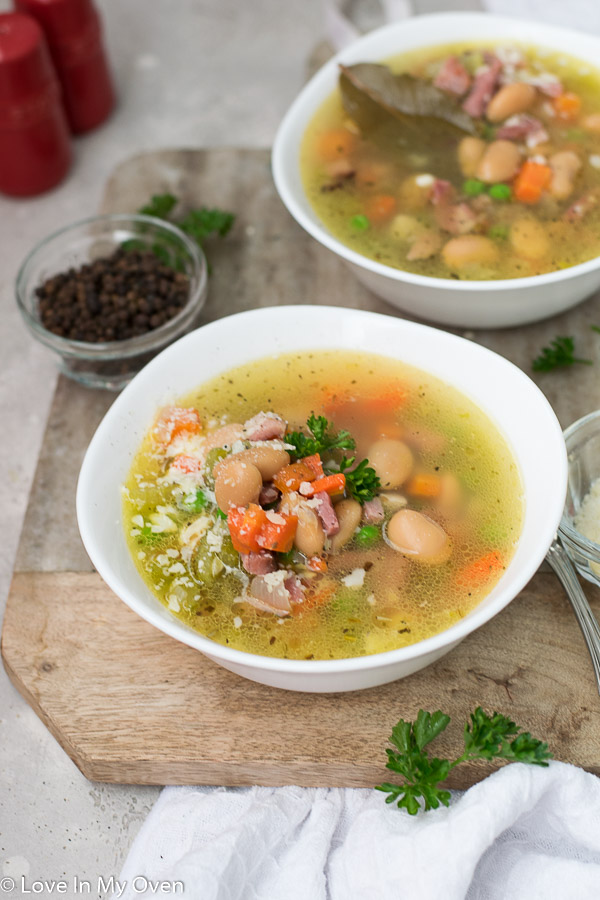 How do you make soup with a leftover ham bone?

If you’re visiting this recipe, chances are you have a giant ham bone on hand that you’re looking to do something with! The nice thing about using the bone in soup is that it naturally flavors the water used in this soup as it cooks, basically making a ham broth at the same time. You only need water, no other flavored stock for this recipe!

To make this ham bone and bean soup, start by dicing up a few veggies and then sautéing them in a large soup pot, along with some chopped up ham. 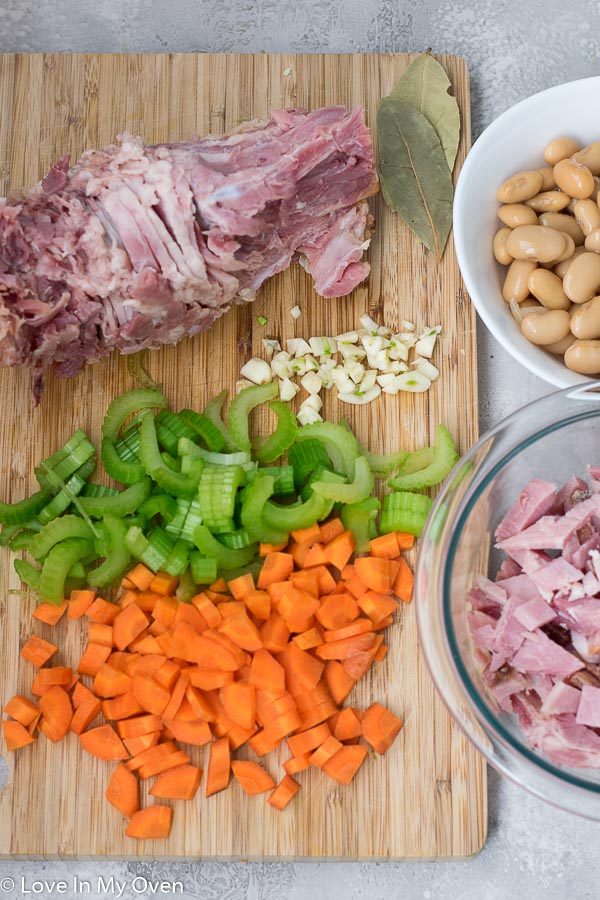 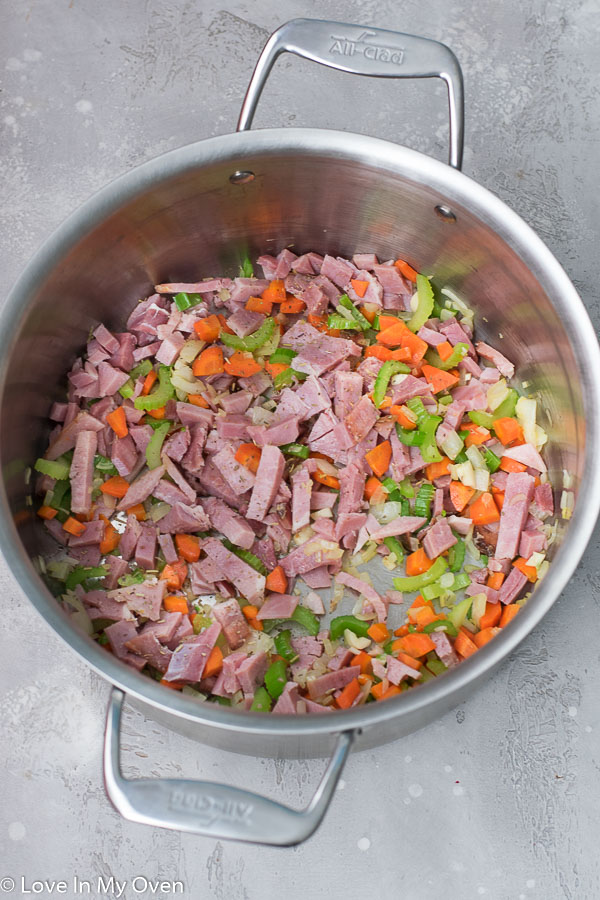 Sauté the veggies until slightly soft and crispy, then add the garlic, before adding the diced ham. Cook for a little bit, allowing the ham to crisp up a bit, before dropping in the beans, Italian seasoning, salt and pepper, and a couple of bay leaves, before placing the ham bone in the pot.

I used butter beans in the soup, but you can substitute for any white bean. If you wanted to use dried beans, you would need to cook these first before adding them to the soup!

Pour the water over the mixture, then turn the stove to high heat to bring everything to a boil. Once boiling, reduce the heat to a simmer and cook for 60-90 minutes. A longer simmer time will result in even more flavor! 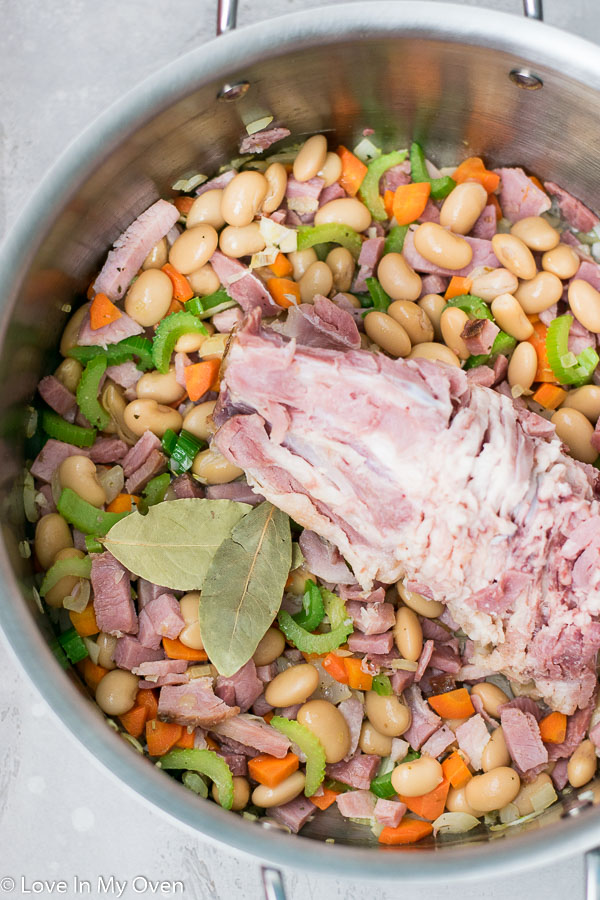 Once the soup is done cooking, remove the ham bone. You can shred any of the cooked meat off the bone and add it back into the soup!

What do you serve this ham bone and white bean soup with?

We love topping this with a bit of shaved parmesan cheese and some extra pepper. If you want something on the side, you could serve this up with some garlic breadsticks, cheesy cornmeal drop biscuits, or these 30 minute dinner rolls (my fave).

This soup makes enough to serve your whole family, about 5-6 servings. The soup freezes very well too! So if you make too much or you’re just tired of ham, think about saving half in the freezer to take out for another day! Just thaw it overnight in the fridge, then reheat the soup in a pot until warmed.

A hearty, healthy soup that makes the perfect use for that leftover ham bone! 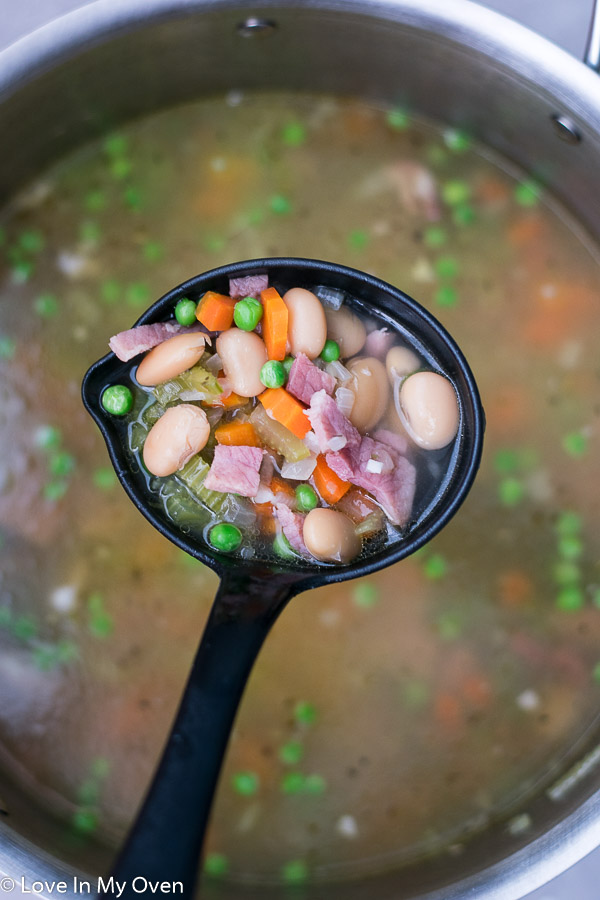 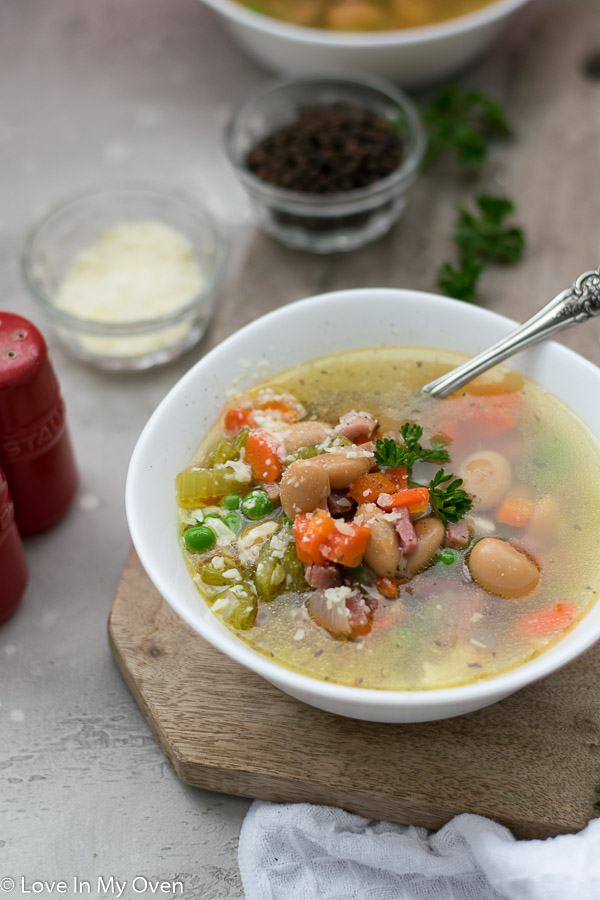 Some of my other favorite soups from the blog:

Don’t throw away that bone! Make this super easy and flavorful ham bone and bean soup. Full of nutrition and even freezer friendly!

Once cooled, leftover soup can be stored in an airtight container in the fridge, for 3-4 days, or up to 2 months in the freezer. Thaw the soup overnight in the fridge before reheating.

*Use any white bean you want, I used butter beans for this recipe!

**The soup will taste great after 60 minutes, but if you have extra time, leave it to simmer for an additional 30 minutes for even better flavor! 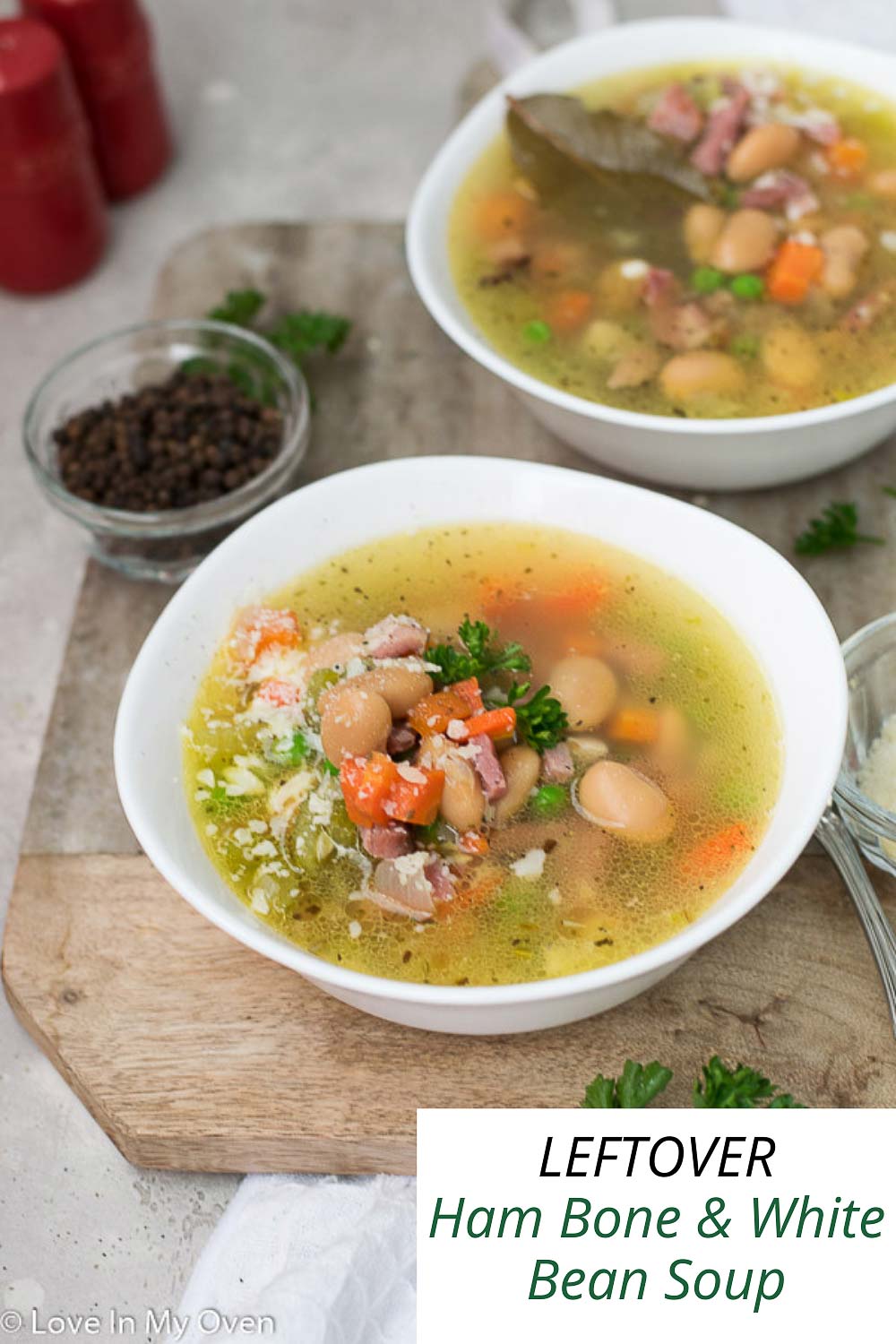 It’s Sunday, what are you baking!?
Yesterday I remembered these mini maple pecan cakes and now they’ve definitely got to make an appearance soon!! ❤
Made with the help of @williamssonomacanada
.
.

Spooky ice cream! 🎃👻
To my black licorice haters, this one is not for you!!
Iconic Canadian tiger tail ice cream, in an easy no-churn recipe!
It has always been one of my favorites!! 🧡🖤
.
.

My first new layer cake in a while, this pumpkin caramel beauty is a perfect fall cake!! 🍂
Soft, lightly spiced pumpkin cake with salted caramel cream cheese buttercream….😍
Want a slice?
*New* on the blog!
.
.

I made a batch of this for my latest post coming up this week… and we ate the leftover caramel with some apple slices!! 🍎🍏
Such a great treat.
My favorite thing EVER and such a cinch to make.
Who else LOVES salted caramel sauce!? 😍
.
.

A fall favorite!! 🎃
Peekaboo chocolate pumpkin loaf!
Such a fun (and delicious) bread to make during the fall season. The pumpkin and chocolate flavor combination is absolutely delicious!!
The kids are off school today so it’s another 3 day weekend for us! 🙌
.
.

I keep meaning to take new photos of this one because it’s still a favorite every fall!! 🍂
Let’s cheers to Friday with this apple cinnamon gin fizz!!
It’s such an easy drink to make and a very fun one to share with friends.
Cheers! 🥂
.
.