This easy overnight beer bread is made with only a few simple ingredients and requires very little hands on time! Serve up this no knead beer bread with soup or chili!

This post is sponsored by Williams Sonoma Canada and Belgian Moon. All thoughts and opinions expressed in this post are my own. Thank you for supporting the brands and products that make Love In My Oven possible.

Who doesn’t love fresh, warm bread from the oven!? Possibly one of the best things ever invented by man. There are few things I love more than a warm piece of fresh bread with some butter on it. The best!! Simple joys in life, right?

Anyway, have you ever tried making bread with beer? It acts as a natural rising agent from the yeast in the beer, and it actually creates a nice flavor to the bread too! And if you’re making an overnight bread like we are here, then everything gets time to mingle together and get light and fluffy (and delicious).

I’m using Belgian Moon beer in this recipe, and since you only need a bit of beer for the bread, you can watch everything rise with the rest of the can in hand!

How do you make overnight beer bread?

This is the easiest recipe! Seriously. Since this is an overnight recipe, you should plan to get this recipe started the night before you would like to eat it! The bread needs up to 24 hours to rise, but at least 18 hours to rise enough for baking.

In a large bowl, add all of the ingredients together:

Stir it all together until a loose, shaggy dough is formed. Once everything is combined, use your hands to form it into a loose ball.

Cover the bowl tightly with plastic wrap and set in a warm place to rise. I usually place mine near a sunny kitchen window (but not in direct sunlight). If you find the plastic wrap isn’t sealing tightly enough over the top of the bowl, use a large elastic to keep it secure around the bowl!

Now for the rise! There is nothing you have to do now, except wait those 18-24 hours or until the dough has doubled in size.

About 2-3 hours before you’re ready to eat the bread, turn the risen dough out on to a lightly floured surface, and begin kneading it slowly, folding it over in half and turning it, over and over, for about 3 minutes. Form the dough into a tight ball with the ends of the dough folded under, and place the dough into a well-floured proofing basket (bottom up).

Tip: If you don’t have a proofing basket you can place the ball of dough on parchment paper (bottom down) and then place it in the Dutch oven you plan to use to bake the bread. Cover the basket (or pot) with a damp dish towel and let it rise again, for 1-2 hours.

After 1/2-2 hours, turn the bread over on to a piece of parchment paper and place it in the Dutch oven (if it’s already in the Dutch oven, skip this part). Use a bread lame or very sharp knife to slash a design or just a simple “X” on top – this step is important as it allows the steam to escape.

Place the lid on the pot and then place the Dutch oven into the cold oven. Turn the heat to 425 F and wait for the temperature to be reached. Once reached, let the bread bake for 25 minutes. At this point, remove the lid and then continue to bake the bread for an additional 25 minutes or until the bread is a dark golden brown.

Remove the bread from the oven and allow it to cool for 10 minutes in the pot before grabbing the ends of the parchment paper and lifting the bread out, placing it on a cooling rack. Try to resist slicing the bread before it is cool enough to touch! This will ensure it retains its height.

How do you make cinnamon honey butter?

This is another ridiculously simple recipe. To make this butter, whip together the following in a stand mixer until light and fluffy:

The butter is nice and soft and absolutely delicious. You’ll love it!

How do you serve this overnight beer bread?

This bread is perfect as is, for an after snack with the cinnamon honey butter, or on the side with a chili, stew or soup. Here’s a few ideas for you:

If your family is like ours, this bread will be gone the minute it comes out of the oven. ESPECIALLY when there is cinnamon honey butter involved!

This easy overnight beer bread is made with only a few simple ingredients and requires very little hands on time! Serve up this no knead beer bread with soup or chili!

Leftover bread can be stored in an airtight container at room temperature for a couple of days. It will get drier and harder as time goes on.

*If you’re not using a proofing basket, place the dough ball on to a piece of parchment paper (bottom down) and then place that dough into the Dutch oven. Cover the pot with a damp dish towel to rise. 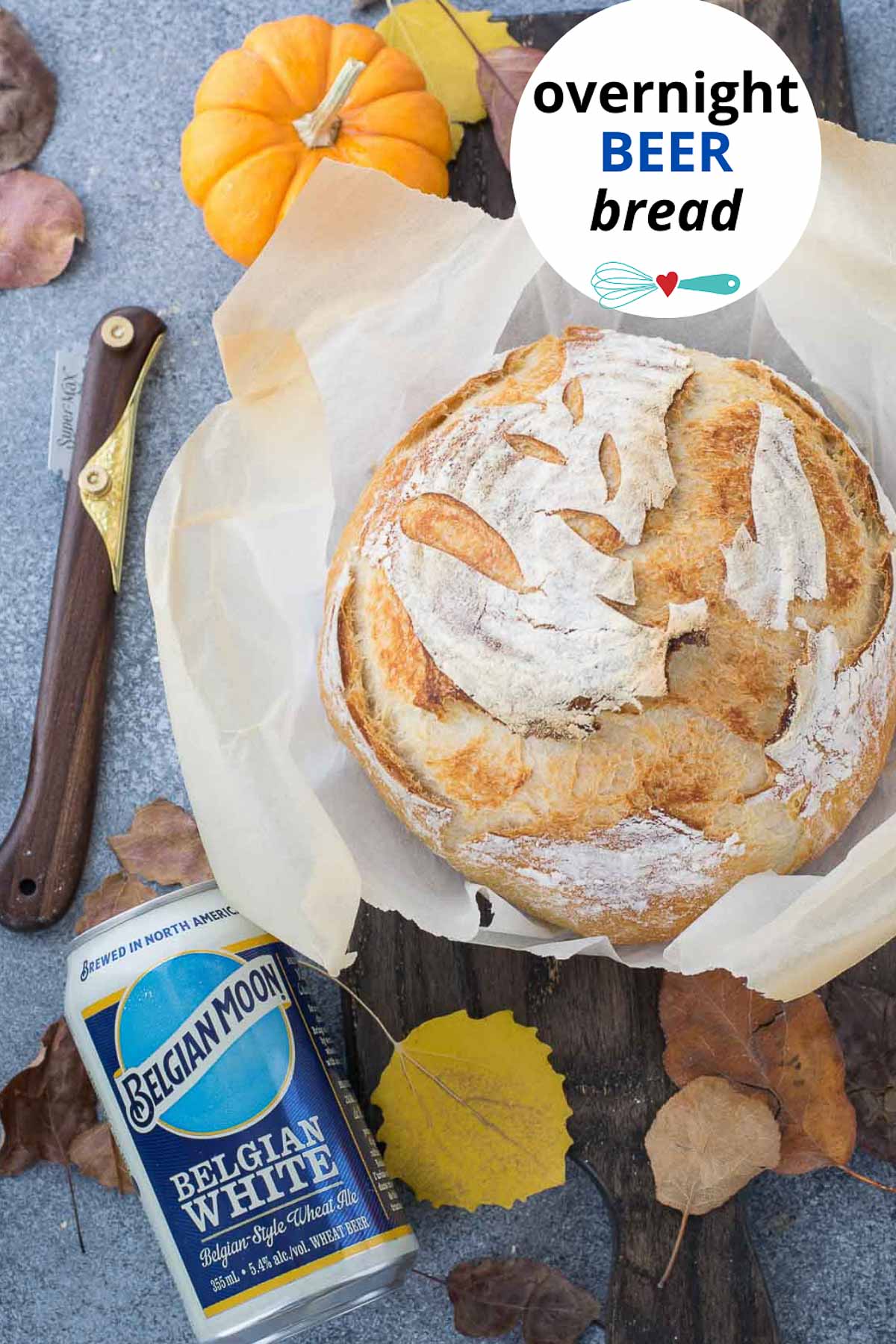 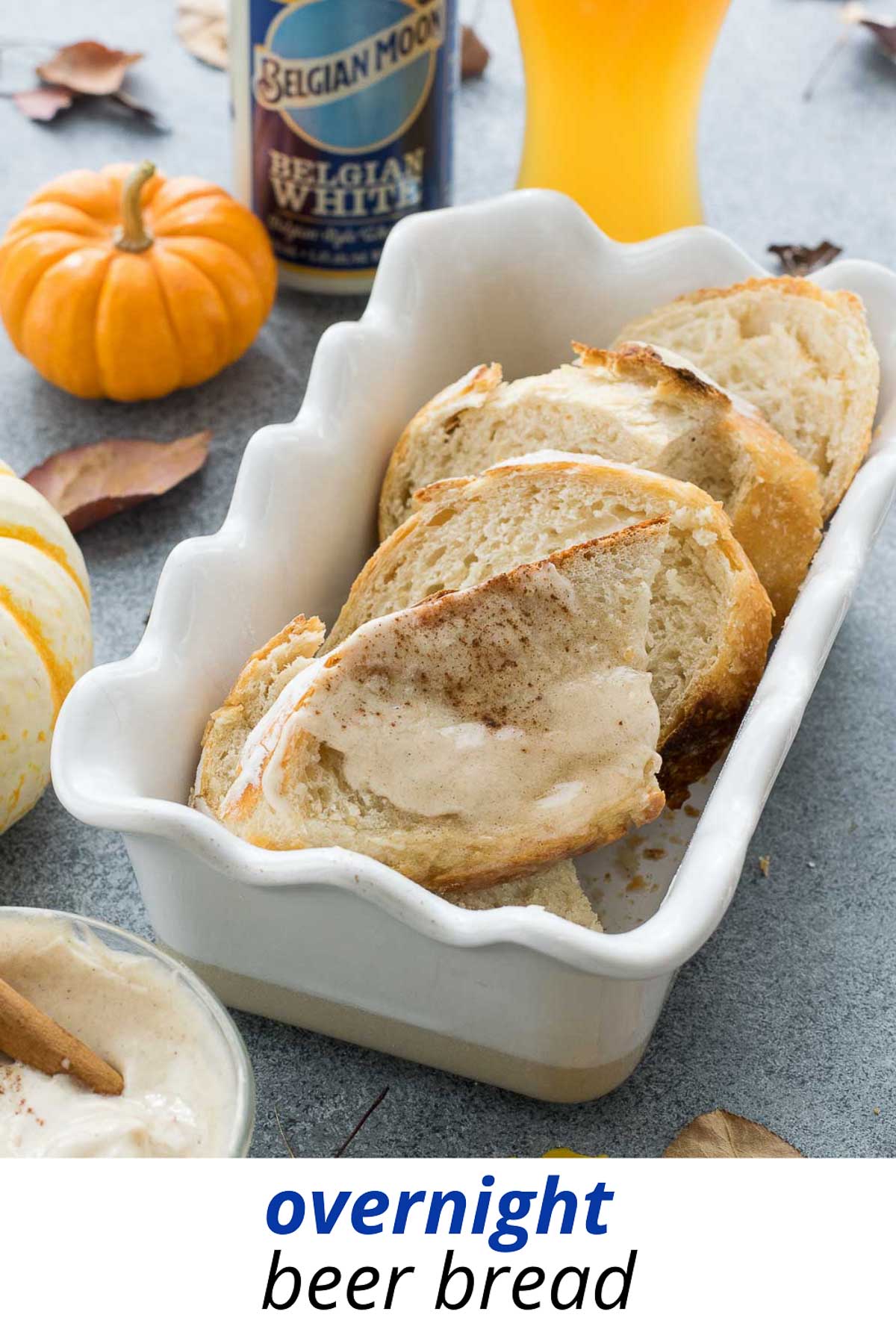