This easy apple cinnamon pull apart bread is made entirely from scratch! Topped off with a simple caramel sauce, this soft, delicious apple cinnamon bread will be a new family favorite.

Guuuys this is one of those recipes that I tested at least 3 times before bringing it to you! Sometimes I only have to test something once and it works out great, other times I need to tweak again and again until I get it just right. In this case, I really wanted to get the technique nailed down as it’s not my usual simple mix and bake!

BUT I promise you its really quite easy and I’ve got step-by-step photos for you along the way!

Also, can you believe it’s October tomorrow?! I’m not ready. The wind has been so bone-chilling cold these days it makes me want to sit in a sauna all day. The leaves are gorgeous too but they’re nearly all gone now from the trees.

Winter, stay away! At least I’ll have a lot of excuses to bake apple cinnamon pull apart bread!

What is pull apart bread?

If you haven’t made a pull apart bread from scratch, don’t be intimidated! It’s super simple and actually quite enjoyable to make. Pull apart bread is basically a loaf that is already portioned into sections, that you can just pull with your fingers to get your serving, rather than slice.

It’s perfect for getting all the sauce and flavors right into the nooks and crannies of the bread! Plus it’s very fun to share.

How do you make apple cinnamon pull apart bread?

Start the recipe by proofing the yeast in a mixing bowl fitted with the dough hook with warm whole milk and sugar. The yeast will foam up a bit after a few minutes. Add in the salt and butter and one cup of flour, then mix on low. With the mixer running on low, add in the eggs, one at a time, followed by the remaining flour.

Once everything is combined, add the remaining flour and then mix on medium-high for about 3 minutes, or until the dough becomes a soft ball and pulls away from the sides of the bowl.

Cover the bowl and allow it to rise for 1-2 hours or until doubled in size.

While the dough is rising its a good time to make the filling!

I used my mini apples from the backyard, but you can use whatever flavor apple you like best. Green Granny Smith apples are a great option!

Dice the apples very small, and add some sugar and a sprinkle of cinnamon. Stir to combine. The fruit will release their juices while sitting in the bowl, and that is totally fine!

Once the dough has risen, lightly flour a surface and then divide the dough into two equal sized portion. You can either use a scale for this to make sure they’re exact, or just eyeball it the best you can!

Place one of the dough halves on the floured surface and use a rolling pin to roll it out to about a 9 x 15″ rectangle. Smear the dough with softened butter and sprinkle it with cinnamon.

Using a sharp knife or a pizza slicer, slice the rectangle into 4 even strips. Using a slotted spoon, sprinkle a few tablespoons of the apple filling all over one of the slices. You’ll be using half of the filling for the first loaf, and the other half for the next loaf.

Place one of the other slices over top of the one with apples, then add filling on top of that too. Repeat until you reach the last slice on top! Sprinkle more of the filling on top.

Tip: Don’t worry about apple pieces falling off, you can add those back into the loaf later!

Slice the stack into 6 even stacks and then place each stack next to each other in a parchment-lined loaf pan. Any apple pieces that had fallen off can be sprinkled over the top of the bread now.

Repeat the whole process with the next ball of dough, placing it into the next prepared loaf pan. Cover both pans with a damp towel and let them rise for another hour to hour and a half or until puffy and risen.

Pop both the loaf pans into the oven at the same time and bake for 30 minutes, or until lightly browned on top. Wiggle a piece in the middle of the bread to see if it looks baked or gooey on the inside; if it is gooey, bake it for another 5 minutes before removing from the pan!

You can enjoy the pull apart bread as is, or you can drizzle them with a simple caramel glaze (HIGHLY RECOMMENDED)!!

How do you make the simple caramel glaze?

When dealing with caramel my go-to is usually my easy salted caramel sauce, but it does take a bit more work. This sauce couldn’t be easier. You just whisk together 3 ingredients:

Heat everything up in a saucepan over medium heat until just simmering, then let everything simmer for 10-15 minutes or until thickened up.

Then it’s ready to drizzle! The glaze will thicken up as it rests.

Do you serve this apple cinnamon pull apart bread warm?

YES – this bread is so fabulous warm from the oven, after its cooled down for about 10 minutes. Use the sides of the parchment paper to pull it out of the pan and then place it on a cutting board. Everyone can dig in and grab their own pieces for breakfast!

The bread also keeps super well at room temperature, in an airtight container, for about 3 days.

Can you freeze this bread?

If you are freezing one of the loaves for later, wait until it cools down completely before placing it in an airtight container or bag. I would recommend not adding the caramel sauce to the bread you plan on freezing, and just adding it before serving!

The bread should be thawed overnight in the fridge.

If you love this bread you’ve got to try some of my other breads and loaves!

These easy apple cinnamon pull apart bread is made entirely from scratch! Topped off with a simple caramel sauce, this soft, delicious apple cinnamon bread will be a new family favorite. 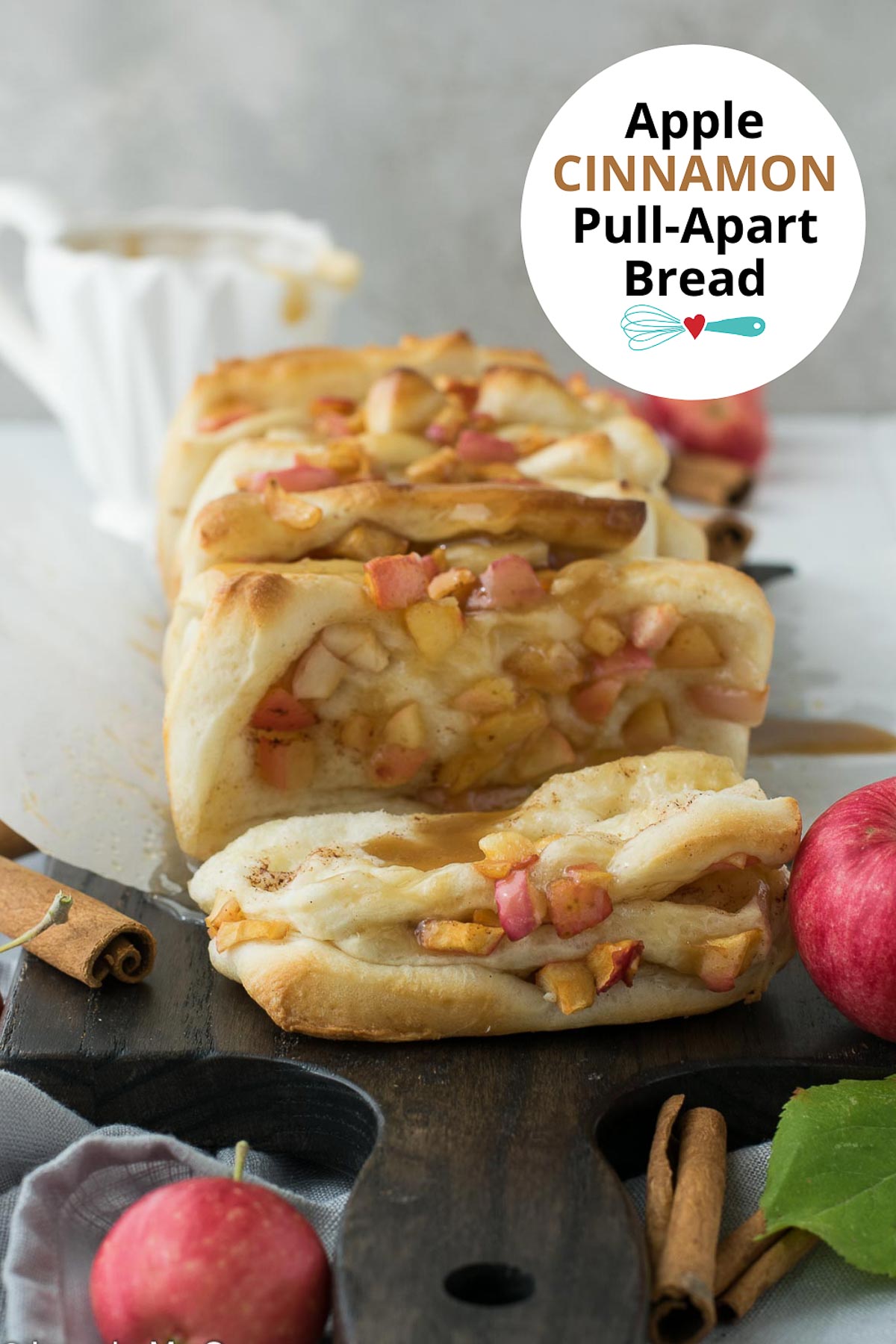 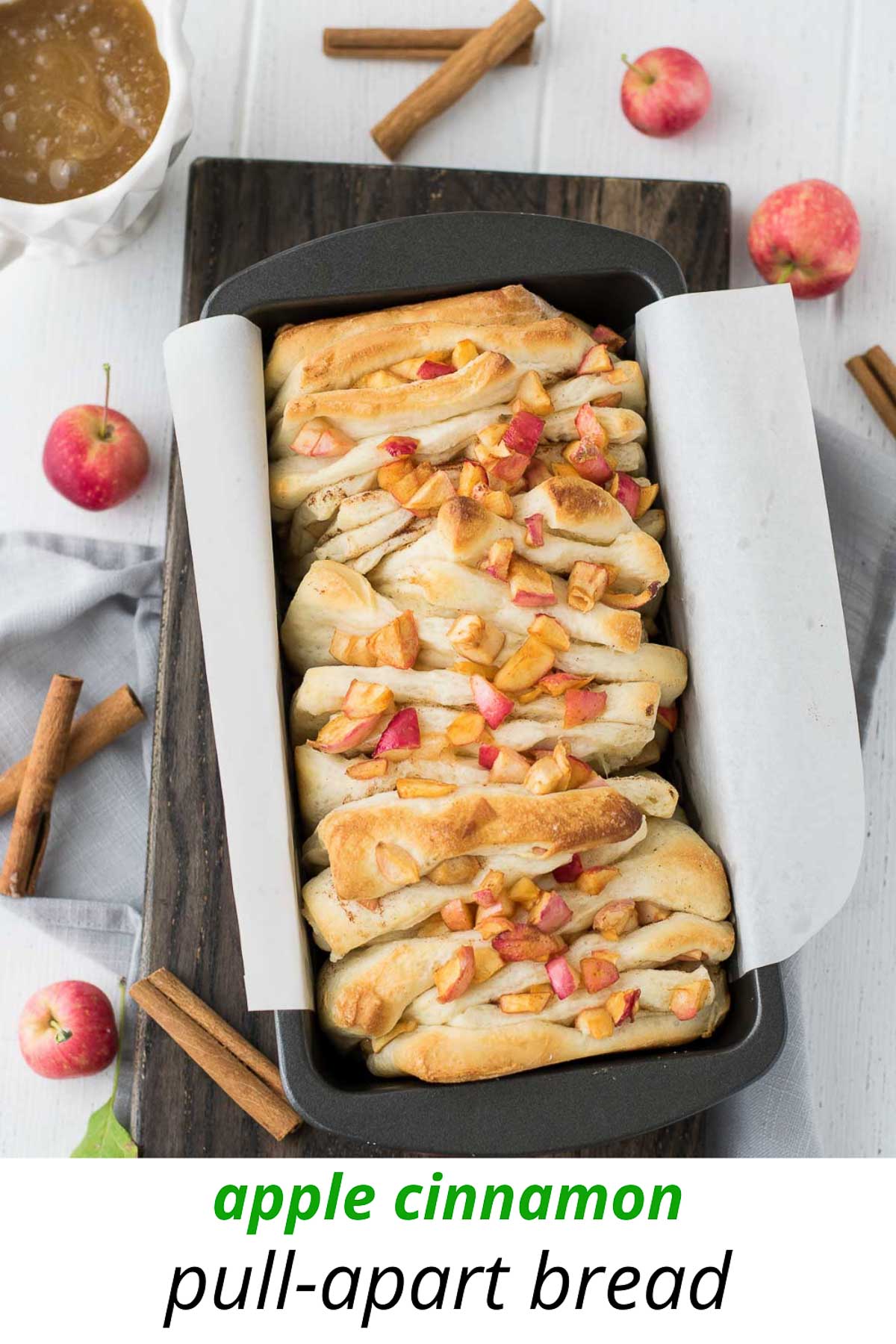 Hiii remember me?! Ok it’s been more than a whil