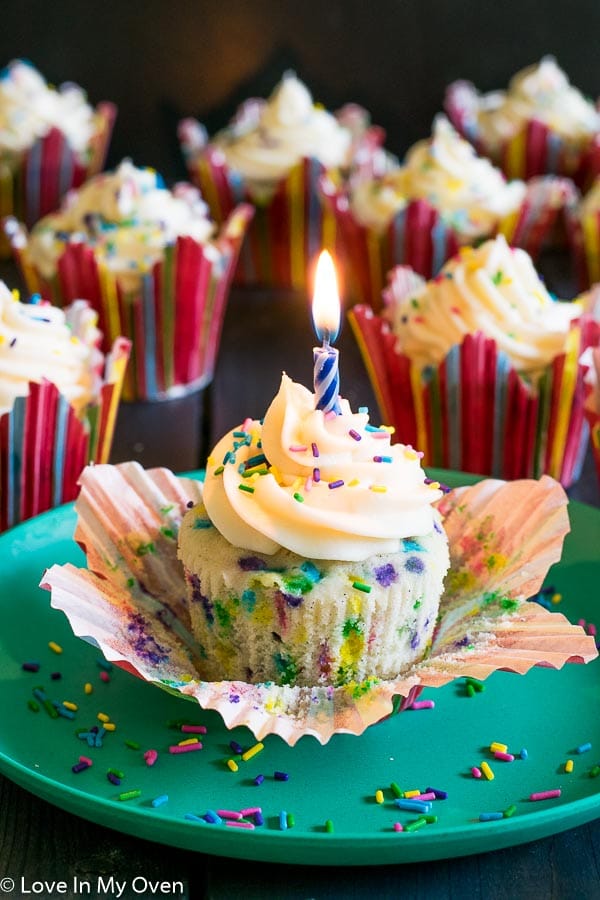 *This post was originally published in 2017. I’ve since updated the text but the recipe remains the same*

So, you might remember from a few posts back my mention of some birthday cupcakes! I was making them for the group birthday party we were having – I’m happy to say the cupcakes were a hit – and I’m finally getting around to posting the recipe for them. A month is reasonable, right!?

This weekend is very fitting for this post, because Saturday is my soon-to-be 3 year old’s actual birthday. I can’t believe he’s going to be 3!! I know that’s very young, but it honestly feels like just a short time ago that I was holding a red, wrinkly newborn in my arms, staring in awe at the miracle that I actually created. Mushy Mommy moment aside, it’s time to think about cake. 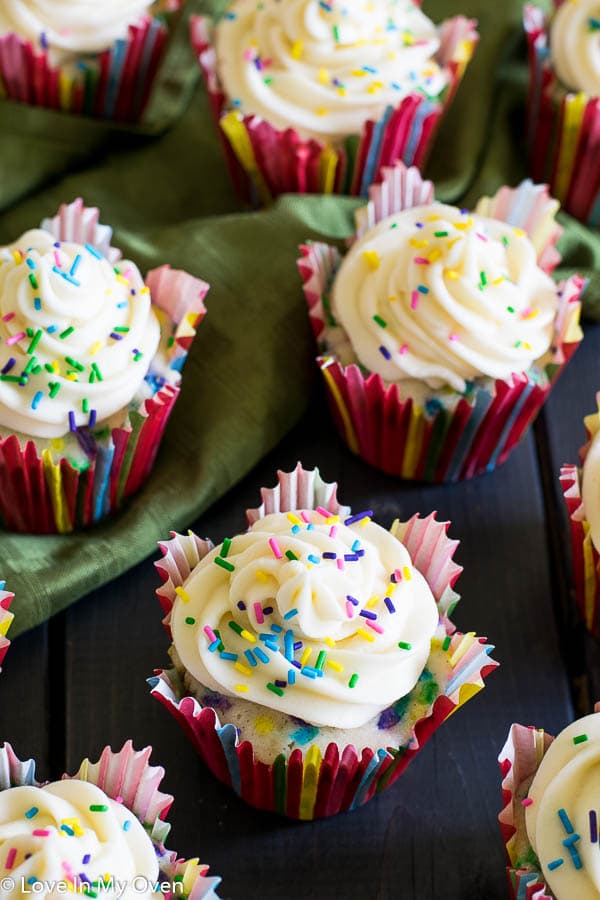 Oscar’s actual cake is going to be a firetruck cake, pending I can actually pull that one off, but after looking at all the pictures of these vanilla beauties I’m kind of wishing I was just making a batch of these cupcakes again!! They’re light, fluffy, sweet and full of sprinkles. Everything a birthday cupcake should be, no?

Let’s talk about the ingredients first.

The fluffy texture comes from the buttermilk and egg whites. Buttermilk is possibly my favorite weapon of mass-bake’struction. Did I really just say that? Along with a slight tanginess to the finished product, buttermilk keeps baked goods nice and moist, without any extra fat. Do I need to keep convincing you?

Also, to get that wonderful vanilla flavour in the cupcakes I use vanilla-bean paste. This one

is my favourite!! It’s pretty pricey for how small the bottle is, but it lasts a long time. So worth it!! It’ll leave such a smooth vanilla taste in your baked good, with specks of real vanilla bean. I’m drooling a little thinking of it!

I used Wilton multicolor sprinkles, but you can use any sprinkles, except for those little balls (nonpareils) as they always bleed their color. The cupcakes take about 20 minutes to put together, with about 20 minutes of bake time. Be sure to let them cool completely before frosting! 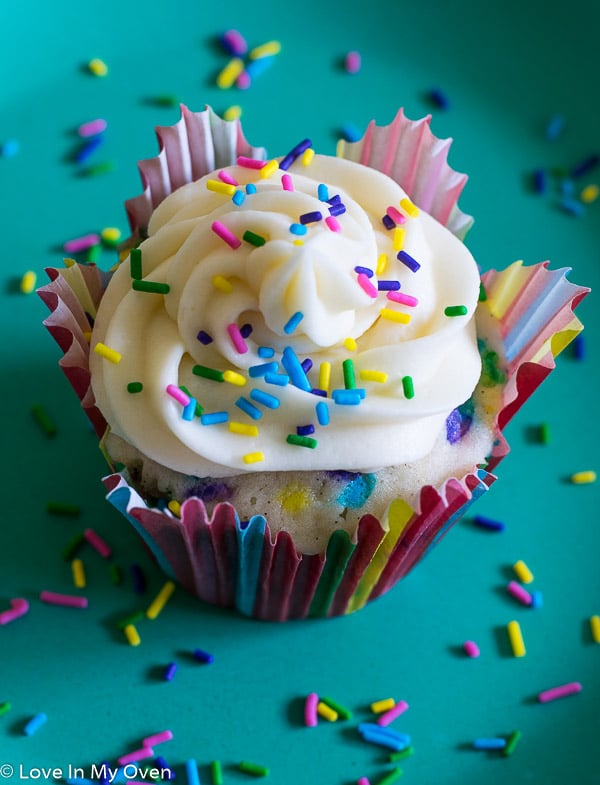 How do you make birthday cupcakes?

This is about as easy as cupcake recipes come!

This recipe can be made with either a stand mixer (my fave) or a handheld electric mixer. Use it to cream together the butter, sugar, egg whites and vanilla until nice and smooth.

The cupcakes take about 20 minutes to be perfectly baked!

Let them cool completely before preparing the icing and frosting the cupcakes with a perfect vanilla buttercream frosting. 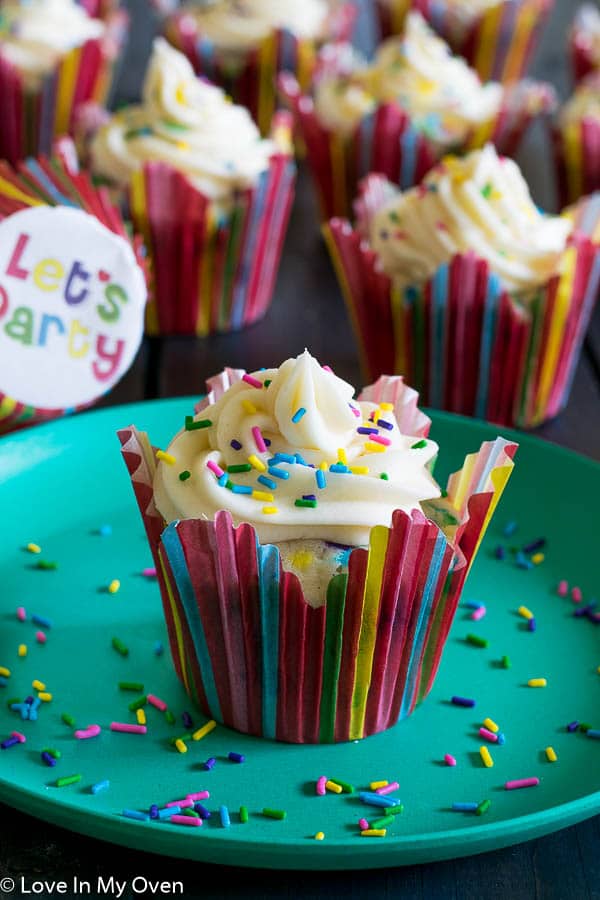 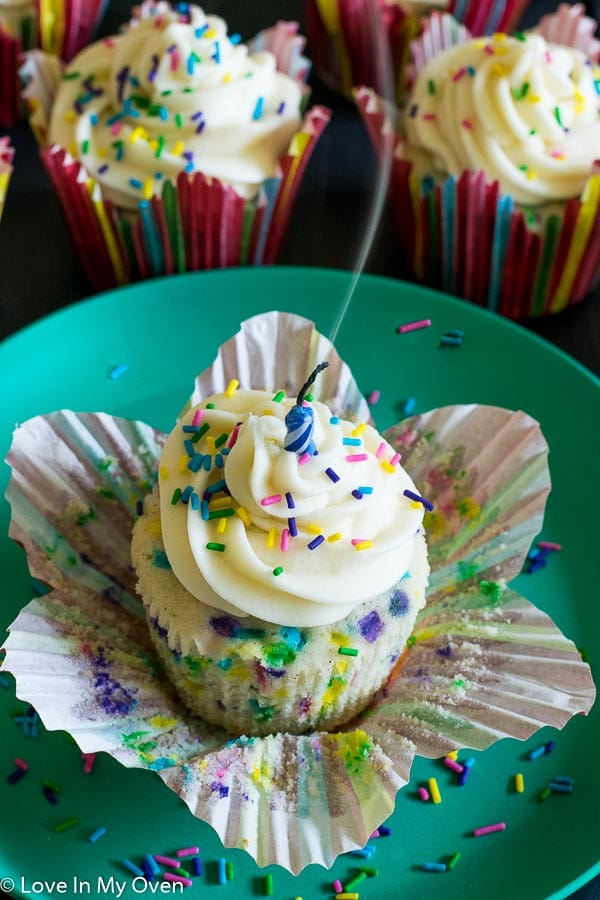 Some of my other favorite cupcake recipes on the blog: 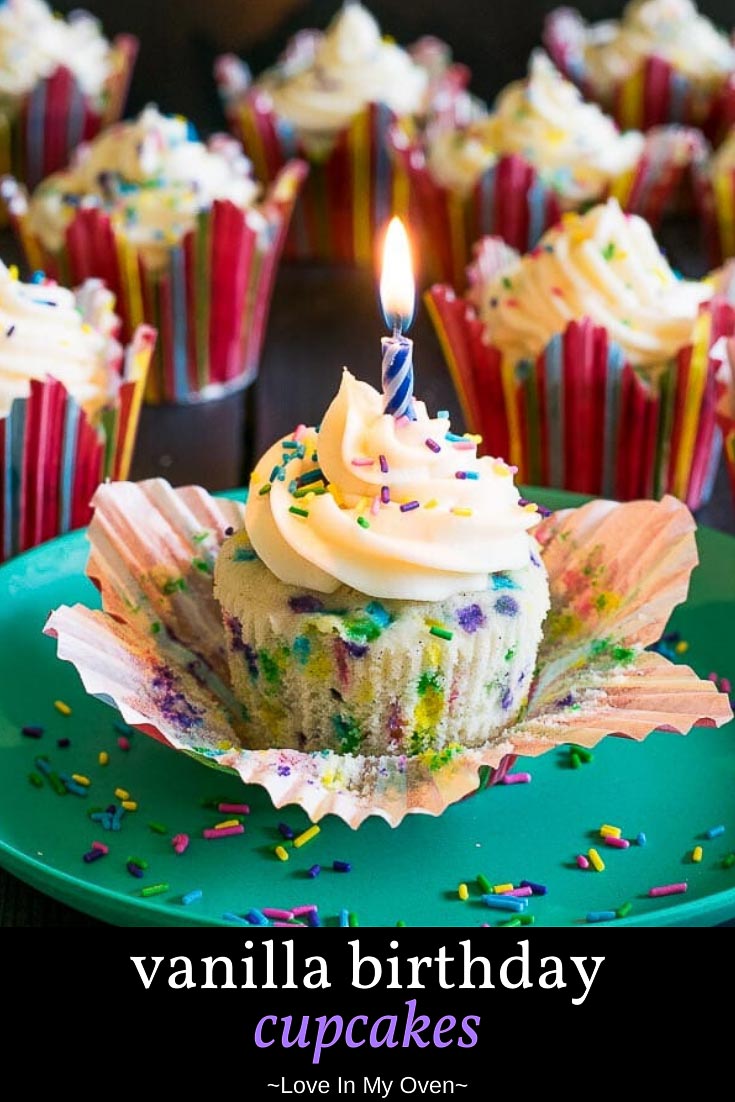